We all played around with this little thing: wood labyrinths with one or many little balls called a “Ball-in-a-maze puzzle”. The goal was to find a path through the labyrinth so the ball was not trapped by the holes in the board: 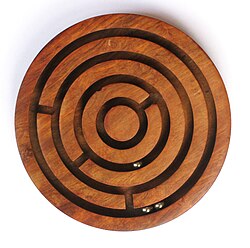 Google leveraged the idea itself and made a funny little game PlayMapsCube out of it to communicate the ideas and logic behind one of its main products: Google Maps.

The whole game was developed using Three.JS. This is a JavaScript library developed

So, let’s start with a real world super size maze:


The aim is to communicate something like travel speed, corners, routes and underground transport in a gamified application. During the game you will explore eight different levels in several “cities” around the world:


Explore the game yourself: playmapscube.

Three.JS itself is a very powerful library. If you want to learn the basics I really liked this video-course.


And if you want to use Three.JS with your own geodata I strongly recommend you to use the Qgis2threejs plugin from Minoru Akagi. You can find some great examples on Twitter, too:
If you’re more into ArcGIS you might want to use ArcGIS Pro which has a native 3D support (here’s a web course), use the ArcGIS JS API with Three.JS or switch to the CityEngine with the CityEngine Web Viewer: