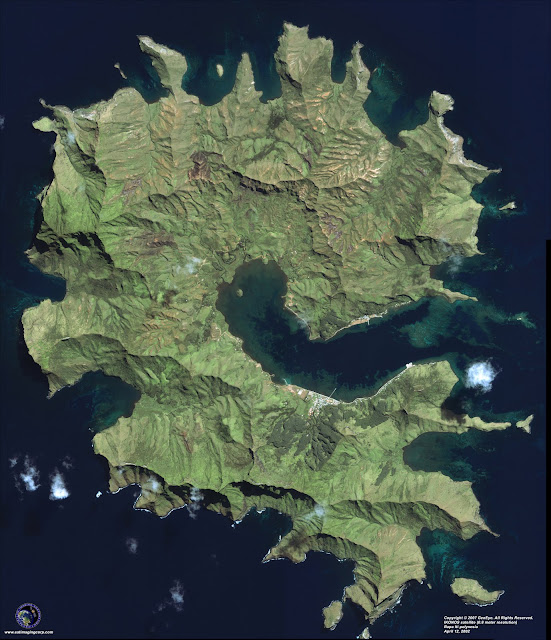 Everyone knows the island of Rapa Nui (the “big”) also named Easter Island, but very few know the island of Rapa Iti (the “small”). This island worthy of inclusion in the best novels of Stevenson is the southernmost inhabited lands of French Polynesia. This extinct volcano has a deep bay and breathtaking steep reliefs, but no airfield. The 450 inhabitants of this island are so isolated that they have developed a language apart from the commonly shared tahitian language in Polynesia.

One day a child was born in Luxeuil (France, Haute-Saône) who spoke a language that no one understood, even the most experienced linguists. By chance, it is in a marine bar that a man has recognized this language rummaging through its travel memories. This is the incredible story of Marc Liblin I invite you to discover.

Rapa Iti or impossibility of an island (to be mapped, it goes without saying). This Island is indeed remained one of the last inhabited land under French administration to be non mapped in the 21st century! There existed a SHOM  map(French Hydrography and Oceanography Marine Service), a legacy of military protectorate of the island, but no classic topography could not be performed (specific relief restitution, buildings, roads, etc.. By drawing from stereoscopic aerial photographs).

The aerial photography of high tropical island is a huge challenge when you know that the photo must be made between 10 a.m. and 14 p.m. to minimize shadows on the ground and that these hours are always clouds hung reliefs.

The Island,  distant of more than 500 km from the nearest airport (Raivavae) made ​​it almost impossible to perform a campaign of aerial photography and no aerial photographer would have agreed to make hundreds of round trips in the hope of hitting the rare day where the reliefs are released. It is through the use of one of the first colour stereoscopic high-resolution satellites (Ikonos <1m) we were able to overcome this technical barrier and produce the first topographic map of Rapa Iti 1/5000 in 2009!

I had the chance to drive the last systematic mapping of all the islands (about 117) of French Polynesia  project and to participate in this small technological revolution. I invite you to browse through the IGN magazine (in French) where you’ll find a wonderful Ikonos orthoimage of this fascinating island (page 11 of IGN Magazine No. 49).

You can find the french version of this article on www.cartophyl.com.