Sometimes I have something to tell, but also need to realize that it is not so easy to explain. How many times have you heard of Linux, or maybe Ubuntu? Probably very often, right? I imagine that the comments were (between you and those who spoke, newspaper or friend who is): “Do I need to delete Windows?”, “It is easy, just if you know to program!” or “but there are problems with the printer…” But what makes me proud is when I ask the question, but you use it for work? The Linux world has had a big leap forward in terms of development from 2010 onwards. I don’t know about the main drivers, but an example that has allowed me to understand this is the introduction of the print layout in QGIS (or print composer) in version 1.5 of the Tethys 2010 (changelog). 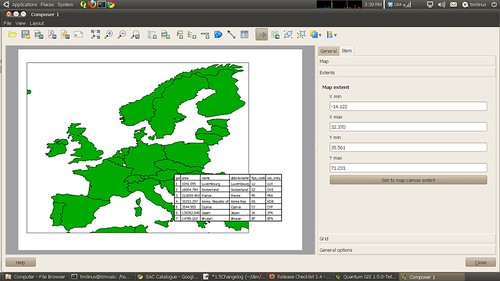 Although it remains my main reference, GIS made me to get deeper into this Linux world. I Work (or play) with Linux! It has the primary advantage of a huge software catalog and is very similar to the Windows installation procedure and can run on a Mac as well. But the idea of ​​Linux and “Free Software” in general is the ability to freely develop. So we should be over the age of cracked software and updates that do not allow the use of older software, but unfortunately we are not. Many will remain tied to their proprietary systems and it is difficult to change your mind, but the important thing is to be aware. I was aware of it and did not want to abandon my Windows XP, but one day I decided to try it and after almost two years of trying I made the move… So what did I found? With Ubuntu (I still love it!), I felt very often disappointed. Due my limits of knowledge it was hard but in the end I almost always managed to get to my goal. This is because I have the ability to choose alternative software (or methods) and switch from one to the other without limits. This is something that confuses in the beginning, but when you understand the logic, you come to realize that:

I did not choose Linux because it’s free, but rather for superiority and power.

My friends of the LUG (Linux User Group) in my area, are not simple fellow chatter. They are professionals in systems, development and networks, with which to learn and above all to apply the new stuff i learned at every meeting. Now create virtual machines, operating systems, dedicated and reliable databases, deliver these solutions in the cloud and thus be released from the PC you use, it is a real step forward. Entering the Linux world is not easy, but it is something that everyone can do. What I can promise is related to the availability of learning and questioning. I made a lot of mistakes and struggled with the Linux world but in the end and after the analysis of my “training” I need to say that the created “negativity” was only lasting for this very moment. Today I face these challenges with a more positive spirit and let myself be carried away by suggestions and advice I receive. Sometimes I even drive on some of the answers that are given to me, but doing so I learned to apply the method and improvemed myself. sidenote: This article was published in Italian here.
0 0 votes
Article Rating
Subscribe

Thanks for this honest and farseeing post! I hope it’ll motivate people to leave proprietary systems!

The Power of Nerd 😉

I would go as far as saying that Linux actually makes things easier, especially when programming. A single command in the terminal can install libraries that would have taken a frustrating half hour in Windows.

Linux, all the way.