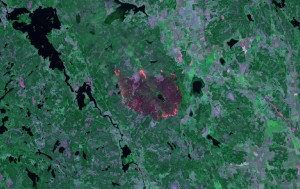 On July 31st a forest fire broke out in the Swedish county of Västmanland. The fire was quite large by Swedish standards covering an area described as 10 x 15 kilometres. There is, to date, one confirmed death. The fire required a intensive response by the emergency services. It is located close to villages and towns and could not be allowed to spread out of control. Firefighters from the Stockholm region were deployed to assist local firefighters, the army reserve was deployed and 10 helicopters were allocated to assist fire fighting. Planes from France and Spain arrived to assist local efforts in containing and extinguishing the fire.

Fire detection from space is well established. Moderate Resolution Imaging Spectroradiometer (MODIS) generates automatic wildfire products: fire products from mid and thermal infrared and post-fire burned area products using image time-series to detect change. MODIS fire products use context to improve their accuracy and avoid false-positives. The Fire products relate pixel-based spectral reflectance to that of neighbouring pixels to identify spatial anomalies (i.e. using spatial context). Burned Area products use temporal context over longer periods to avoid the effects of cloud shadows and other temporary spectral anomalies. The Fire products are released with a 1 km resolution and the Burned Area with 500m resolution. It is important to note that these products are intended to support fire detection, they are not intended to provide operational guidance for fire teams on the ground. Rather they are aimed at Global Change researchers.

Operational monitoring is better suited to airborne sensors and high or very high spatial resolution satellite imagery. These can map fire extent, and to some degree intensity, at scales useful to those coordinating fire responses. Landsat-8 has mid and thermal infrared instruments that can be employed to map fires. Whilst the thermal instrument, TIRS, has some unresolved calibration issues, it can still provide powerful datasets showing the relative distribution of surface temperature in and around a fire. Furthermore, the short and mid wavelength infrared data are potentially very useful.

As a test I looked at an image of the Sala fire, described above, acquired on August 4th 2014. The image was acquired under near cloud-free conditions. In the true colour composite (Fig. 1, click for  a larger image) we can see the smoke cloud extending to the northwest of the fire towards the town of Borlänge. 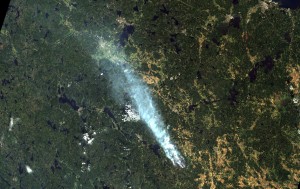 The smoke eventually reached Stockholm over 100 km away.

The area of the fire and it’s relative intensity can also be seen in Landsat imagery. The thermal data (Band 11) shows the intensity of the fire relative to the surrounding forest (Fig.2). 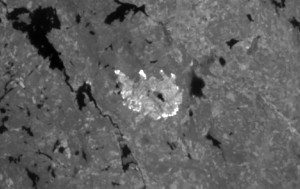 My favourite image of the fire though is a false colour composite of the near-infrared (NIR) and two mid-infrared (MIR) bands. This shows vegetation as green (NIR) and the fire area as purples and reds.

Landsat-8 data clearly offer the potential to identify forest fires. The data have high spatial resolution and the image quality is excellent. There is only one small, but crucial problem: this is the only dataset available from Landsat-8 over the Sala fire. For operational use near daily data are needed: a 16-day revisit time is insufficient.

Customer research by the USGS, the satellite operator, indicates that a large number of operational users would like at least an 8-day revisit time. this was the case for the Landsat-5 and Landsat-7 combo that flew until recently. Vegetation scientists would also like higher revisit times to monitor the seasonal evolution (phenology) of biomes; when the NASA decadal survey committees start meeting next year a daily or near daily Landsat-type program might be something to consider. The technology is mature, the demand exists and the risks are low. A Landsat constellation would be  a wonderful addition to our Earth imaging capabilities!