The sub-title to this post could easily be “reasons to love DLR #123 (transparency)”. You’ll see why in a moment. In this post I am going to do a very brief review of the civilian hyperspectral (or imaging spectroscopy) missions, operating or planned for the near future, that will provide Earth Observation (EO) data. 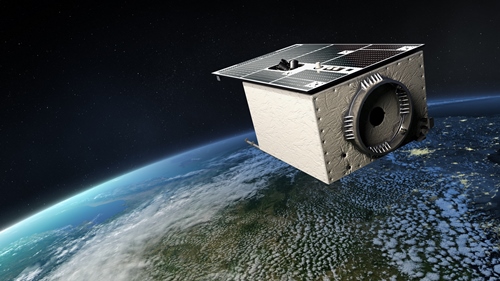 Let’s start in the past. Hyperspectral imagers (HSI) were first launched into space at the start of the millenium. First NASA launched Hyperion on the EO-1 platform in 2000, then ESA launched CHRIS on Proba in 2001, kick-off an exciting new millenium of advanced EO platforms. And there it all stopped. Both were technology demonstrators. Hyperion and CHRIS still sporadically collect data, but only rarely and not with anything near global coverage. Both sensors were plagued by poor data quality but they were, and are, the best we have. Experience with these missions has fuelled arguements that HSI is best left to aircraft flying below the bulk of the atmosphere and a range of companies now offer high quality sensors that allow you to do that.

Jump forward to the mid-2000s and scientists and engineers began to release plans for new spaceborne missions. HSI was just to attractive to ignore. Three proposals  received a lot of attention: the Italian PRISMA concept developed by ASI, Germany’s EnMAP and NASA’s HyspIRI concept. ASI has clearly decided to ficus on SAR (COSMO-SkyMed) and hyperspectral missions; PRISMA entered Phase A (design) in 2007. EnMAP was close behind and cleared critical design review in 2010. NASA’s HyspIRI has a slightly different evolution having been proposed by the first Decadal Survey of Earth Sciences. This argued for the need for an HSI to follow on from Hyperion. Operations were tenatively slated for 2013-2016.

This is where things get messy. ASI’s deadlines for PRISMA began to slip. Information flow on the status of the mission is relatively poor but updates leak out occassionally.  According to Lopinto and Ananasso (2013) launch is scheduled for 2017. However, Staenz and Held suggest PRISMA has been de-scoped suggesting a 2017 launch might be optimistic. ASI still claim a 2015 launch is planned; clearly this is just an outdated website. What is going on at ASI is therefore hard to parse. In contrast EnMAP development seems to be going well. Launch is scheduled for 2017 and the mission is in the final preparation phase. To be fair the original plan was for a 2015 launch but then almost all satellites launch late. The great thing about EnMAP (and DLR) is the transparency.

This leaves us with HyspIRI. This will take a longer post at a later date. Suffice to say, HyspIRI isn’t going anywhere soon. The Decadal Review’s envisaged 2013 launch has been pushed back, and back, and now seems to be sometime after 2022. Given the atmosphere in Congress and the fight over budgets (see previous post), no one can guarantee a program will be progress to launch. I’d not gamble on HyspIRI even though I think it’s a great mission and an important evolution of multispectral imaging. Essentially we are reading tea-leaves here.

That leaves us with a surprising outsider that might pip all the challengers to the posts. The Japanese space  agency JAXA has been developing the HISUI HSI sensor for launch on ALOS-3. In my experience HISUI han’t received as much attention as the other missions mentioned, possibly because  Japanese engineers and scientists tend to publish in Japanese (though not exclusively). ALOS-3 has a launch schedule around 2015, though we can expect that to slip (if my infomation is not already out of date). The ALOS-2 project manager, Yuji Osawa, has stated that JAXA would like to seen an overlap in operations between ALOS-2 and -3 so a 2015 deadline, or shortly thereafter, is not inconceivable.

Regardless, we should have an HSI mission launched in 2017 at the latest, with hopefully a launch before then. Another reason to cheer ALOS-3 is easier access to data. EnMAP will probably be run on a more commercial basis with limited data available to science. JAXA and ESA have a history of collaboration and so we might expect easier access to ALOS-3 HISUI data. ASI I have no experience of, but COSMO-SkyMed data has not proven particularly easy to access.

[…] The sub-title to this post could easily be “reasons to love DLR #123 (transparency)”. You’ll see why in a moment. In this post I am going to do a very brief review of the civilian hyperspectral (or imaging spectroscopy) missions, operating or planned for the near future, that will provide Earth Observation (EO) data….  […]

Hi, great post! Just one remark: EnMAP is a scientific mission with an open data policy for scientific and non-commercial applications. The
ground segment will provide a suite of data products including
geometrically-corrected surface reflectance data. So there is no reason
to expect a limited or complicated data access for science (fingers crossed)…