Probably everyone at least once in your life was searching for a job and had faced the challenge of creating an interesting resume. But when you start to create a normal list-like cv/resume you will surely say “BORING! Next!”… As I’m a geographer the idea was to create map that is the CV itself.

During my work I used QGIS. It was very simply and fast process! In the beginning I chose a coordinate system in the left down corner. From the long list of systems I used WGS84/Pseudo Mercator (EPSG:3857). But you can use every projection that fit your desired area best. After that I just used base map as the background map. To do it I had to install a plug-in called Quick Map Services, which has a convenient list of basemaps and will work much better then the old OpenLayers plugin. I decided to use OSM TF Landscape as it is clean and bright. To my basemap I also added a layer with borders between countries.You can get this at naturalearthdata

As the result I got this map:

After that, I wanted to put on the map places, where I was studying and working. For this I needed nice icons. I found it in the Internet as SVG files.

If you want to put into QGIS an icon from another source. You have to create a new points layer, and in the properties use symbol layer type as a SVG marker, and use symbol, which you saved before on your PC.

When I finished, I opened new print composer to export my map printable.

I added the name to the new composer, and it opened a new empty window. On the right side in the composition I chose landscape orientation. On the left side I chose the option Add new map, and selecting the area I wanted to show the map. I left some empty space to have a place to put more personal information.  I exported my map as image.

I finished work with my CV in Inkscape which is a vector graphics editor which is free and open source). I made there popups and some descriptions. To create popup I simply used Create rectangles and squares tool. With right click, I could choose Fill and Stroke, to change color and transparency. After this I wrote a description. I selected both – square and text, and in a main menu I chose Text -> Flow into Frame. I used straight lines to connect popups with places on the map.

This is the final result of the weekend work. I hope that you like it, and hopefully a potential employer will also appreciate it 😉

Thanks Riccardo Klinger – father of idea! 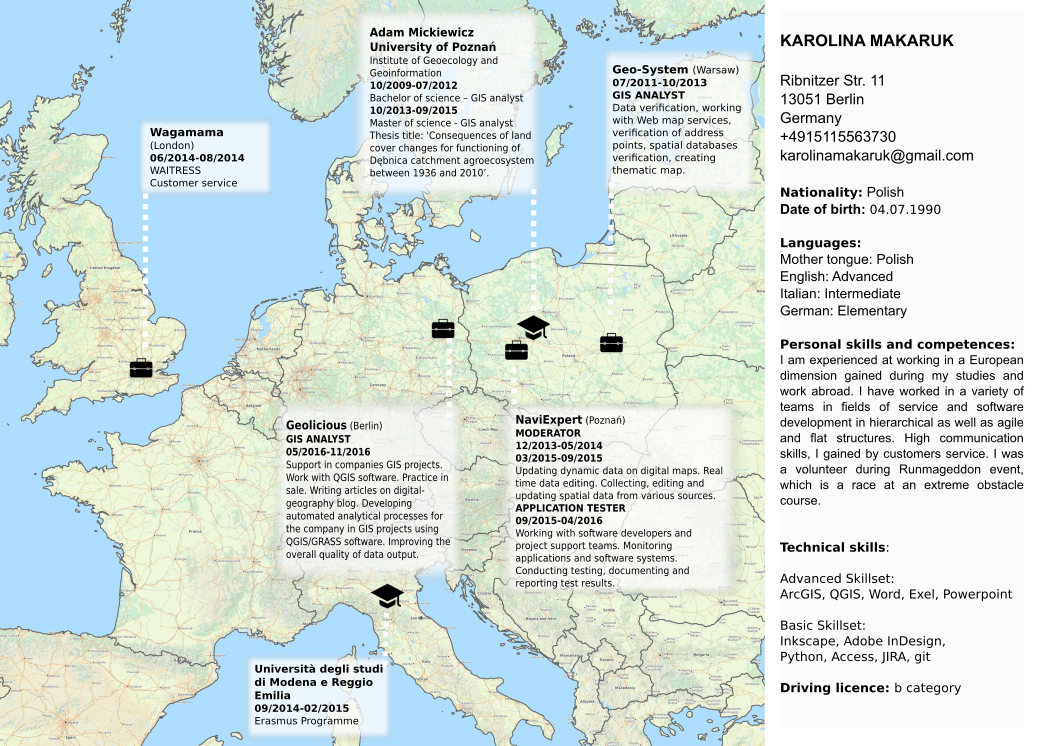 Here you can find a PDF with my map CV.

Very cute. I’d consider adding a path between entries to indicate the timeline. Just a free form dashed line, based on date.

its really awesome idea, not only to attract the employer but also emplore or hiring manger easily understand the work experience and location. thats the power of Map.. Thanks for sharing such ideas

Wha a great idea! I will do that. Thanks for the tip 🙂

It’s very nice, but it only works if you have worked and studied in separated cities but inside a not too much big area. I’ve studied in two cities of the same country 80km away and I’ve worked across the atlantic. There is no way to put this in a map with only one scale. Sorry for the bad english.

What an exciting obstacle! Looking at his challenge from a different angle, you could use the unique geography of your experience as an opportunity to show your cartographic muster by adding an inset (or multiple insets).

This is a very creative idea, and I am excited to run with it. Great work, Karolina!

A great idea, in view of Francesc n other observations that poses a challenge, someone that studied and worked in a single country need not apply…..

Do you have a map-based CV? – GIS Mapping, Data and BI Tools for good

[…] Another example using some symbology comes from Karolina of ‘Digital Geography’ here: https://digital-geography.com/map-cv/ […]